I cannot think to save my life right now.  And I know that probably sounds like the stupidest thing on earth to admit out loud, but I feel like someone removed my brain and stuffed a terrycloth towel in there to replace it.

The problem is I have writer's block and I'm a few pages off from finishing Wesker's Conquest.  Then to add to this, I have four new Resident Evil fanfics floating in my head and they're all vying for my attention.  One of them I just started yesterday and it's called A Rite of Passage.  Which that was supposed to come after my only Jake story.  But I got another idea for another Jake story while I was eating breakfast and that totally shoved the William Birkin story off to the back burner.

I haven't been this chewed on by the writing bug in years and I honestly don't think my poor little brain can handle it.  It's so cluttered in my mind that I feel like I'm going crazy.  I totally understand why most writers end up going nuts, because they probably have the same thing I'm suffering through right now and you can't write a zillion different stories at once.

Maybe today would be a good day to step back from it all and not try to force myself to finish anything.  After all, there is always tomorrow and the next day to fishing it up.  So today I am going to take a break and do as this piece of fanart suggests (Eat donuts): 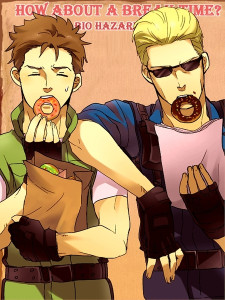