Grant it I would have rather The Evil Within had come out August 28th like it was originally supposed to, but alas.  At least we're at the end of the waiting road.  I even finished paying off the game at Gamestomp today so all I have to do next Tuesday is go and pick it up.  With the release date so unbearably close, yet so painfully far, I did find out a little tiny more about the plot.

Our new home for this adventure is Krimson City, as seen here:

Honestly, I was kinda hoping the name was going to be Beaver City, Badger City, or Possum City, Marmot City, or Vole City, or any small woodland mammal with "city" at the end, but oh well, Krimson City it is.  I would say that I hope this doesn't get blown up, but that's pretty much out, because in whatever is going on in the game Krimson City gets destroyed:

The overall plot to The Evil Within is still a very closely guarded secret, but as I saw in a recent interview with Shinji, he said it takes place in a someone's mind, but you don't know who's mind.  As previously stated, you're never really sure if the things going on a real or if Sebastian is going nuts.  I tend to believe that Sebastian is going nuts.  Jose thinks he's in the mental institution and all the outside parts are just him going deep into his psychosis or whatever, but he is a patient of Beacon Mental Hospital.  Actually I kinda think this too, but then again Shinji could throw all of us a curve ball and it could be Ruvik doing all of this, I don't know?  I wonder if there will be multipule endings like in the first Res game and if one of the ends will be Sebastian is actually crazy?

But that's the little smattering of plot we were graced with since I've been gone.  Now onto some stuff that I've noticed between all the interviews and various trailers, starting with the Tokyo Game Show trailer, which I wasn't able to talk about since TGS went down during Wedding week.  But let's start with Ruvik's dialogue at the begining of the trailer as poor Sebastian is running for his life...

"I know who you are.  Who do you think you are?  I know what you crave- what you fear...  Will you be able to live with yourself knowing what I'm going to make you do?  Too bad they dragged you into this, but either way you're mine; to do with as I please..."

(Note, that I've watched that trailer so much, that I had this entire dialouge committed 100% to memory, which I can't say is sad or awesome, or both!)

Firstly, I don't really like that line "Who do you think you are?" it seems out of place there.  The line should probably be, "Who you think you are?" making it, "I know who you are.  Who you think you are."  That's a little more chilling, the other is a little bit awkward.  However, syntax aside, oh SNAP!  I'm still stuck on the line "Will you be able to live with yourself knowing what I'm going to make you do?"  What the hell is he going to make him do?  Or is he even talking to Sebastian at all?  In the background of Ruvik's speech, you hear someone breathing, or should I say struggling to breathe, so it could be anyone, but probably it's Sebastian.  Also who are the "they" that Ruvik is talking about when he says, "Too bad they dragged you into this"?  Who could possibly have dragged Sebastian into this crazy situation?

I got a few screenshots of the trailer and some of this stuff is really messed up and creepy:

I don't know what that is, but it looks really gross and scary.

Whatever this boinkery is, it is made up of a bunch of bodies and all of them look like they're in pain and tortured.

One of your teammates is in serious peril, but we've seen this one before.  Actually I saw another clip of this, I just don't remember where, and Sebastian walks into a room and the box she's being held in has 4 of The Haunted all around it, I guess to guard it, so maybe you can save her.

And things aren't going well for Oda either.  The last time we saw Oda at Pax East, he was like this: 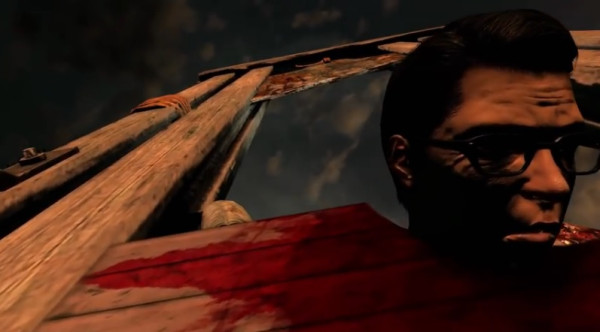 But I think he may actually be turned (or turning) into The Haunted or maybe Sebastian is going crazy, who knows?:

I have to go and cook dinner, so I'll have part two up afterwards.
Collapse